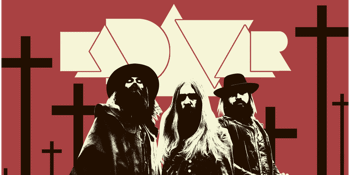 POSTPONED SHOW STATEMENT
With heavy hearts we are forced to postpone the 2020 KADAVAR tour of Australia and New Zealand. Borders are shut and with a two week quarantine the band would be unable to get on the road and get amongst it.
Statement from the band: "Dear Australians and New Zealanders, it’s now official that we won’t be able to make our tour happen. We want to say sorry to everyone who was waiting to see us play and bought tickets to the shows. We will try to reschedule the dates as soon as possible.
We want to thank Christian and Beats Cartel and all promoters, venues and people involved for setting up the tour and we wish everyone the best for coping with the situation which is ahead of us. Stay tuned and be safe!"
We encourage ticket holders to retain their existing tickets as these dates will be honoured for rescheduled shows. The new dates will be worked through with the band, venues and management over the coming weeks.


There are few bands who’ve had more of an effect on the course of classic heavy retro rock this decade than Germany's KADAVAR, having never sounded so much in command of their music.

Arguably the hardest working band in European rock, Kadavar have established themselves quite simply in a different league form their retro-rock labelled peers, smashing out large capacity international tours and festivals (Hellfest/Psycho Las Vegas/Download/Wacken) en masse and landing German and US chart positions for a host of album releases.  Latest album release For the Dead Travel Fast (Nuclear Blast), reignites new depths and heights alike on this their fifth and darkest full-length.

Highly regarded as one of the most explosive heavy psych live experiences on the planet, Kadavar return to Australian and New Zealand shores in March/April 2020 for Beats Cartel on the back of a Mojo Burning Festival appearance.  Not having visited Australian since their 2013 tour with Blues Pills and the follow-up 2016 headline tour, interest will be paramount in 2020 to catch one of the best names in the business perform albums worth of new live material.

The band's fifth record is a perilous journey into the land of the dead, a foray into the bleakest corners of our minds. A heavy, slow-paced, throbbing force of guitar, bass and drums, preciously enriched by spooky synths and a brooding narrative reminiscent of the Victorian death-cult.

“Something like this wouldn’t have been possible earlier in our career. Only now do we know each other well enough to pull off something like this” drummer Tiger nods, “We have the feeling we created something new while at the same time having rediscovered our core DNA. Feels damn good.”

Having shared the stage with icons such as Ozzy Osbourne and the Scorpions, Kadavar embodies the vintage sounds of their predecessors while calling on imagery derived from magic, horror films and the occult like some dark 70s psych trip, relentlessly touring the globe with their lysergic frenzy of a show.  Together the power trio forms a unique symbiosis, challenging each other to fill the sonic space between them when the curtain goes up . Their retro style, incorporating psych, stoner rock, retro rock and doom, has been compared to bands of the 1970s hard rock and metal era such as Led Zeppelin and Black Sabbath.